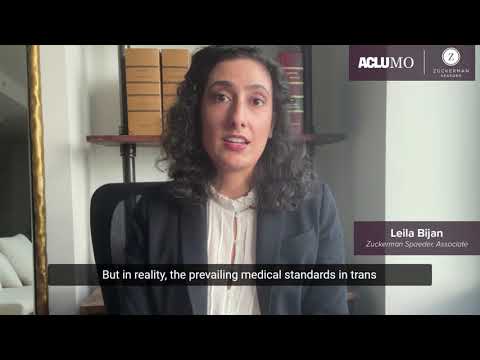 Federal law requires that employer provided health insurance plans provide fair and equitable healthcare coverage and do not discriminate against employees because of their sex or disability, including transgender status

Transition-related care is basic healthcare. Gender Dysphoria is a medically recognized mental health condition that afflicts some, but not all, transgender people. Treatments include, but are not limited to, psychotherapy, hormone therapy, and surgery. Gender Dysphoria places patients at significant risk for depression, anxiety, self-injury, and suicide.

In 2008, Congress enacted the Parity Act as an amendment to the Employment Retirement Income Security Act (ERISA). The purpose of the law was to end discrimination in insurance coverage for mental health treatment, as compared to medical and surgical services. Insurers cannot deny patients benefits for otherwise covered services because they treat a mental health condition—such as Gender Dysphoria—rather than a medical condition.

The complaint alleges that the denial of coverage violates ERISA, the Parity Act, Title VII, the American Disabilities Act, and the Missouri Human Rights Act. Discrimination by insurance companies has been outlawed. Allowing someone to be denied coverage because of their sex, gender, or disability is contrary to our constitution’s promises of equality and fair processes. No one should be excluded from the fundamental equality, dignity, and fairness required by the law simply because they have a different experience with gender.

Caroline Reynolds, Zuckerman Spaeder LLP: “Because her request for coverage was unlawfully denied, our client has to choose between the significant financial burden of paying out of pocket for her surgery, or continuing to suffer psychological distress and functional impairment from her untreated mental health condition. No one should have to make this choice, especially when they have an insurance plan that says it covers the treatment their doctors recommend.”

Tony Rothert, ACLU of Missouri: “This is a case about a Missouri business and its insurance company ignoring their own healthcare policy to override what doctors have determined is medically necessary treatment. Businesses across the country abide by the federal laws that require employer healthcare plans to be non-discriminatory and cover what they say they will. It is unfortunate when legal action like this is required to compel companies to abide by their promises and the notion that employees should be treated fairly.”

The complaint was filed in the Western District of Missouri, Southern Division, in Springfield.