Judge Orders Changes to the St. Louis Police Department’s Treatment of Protesters; Training, Identification, and Posting of Policies Will be Required 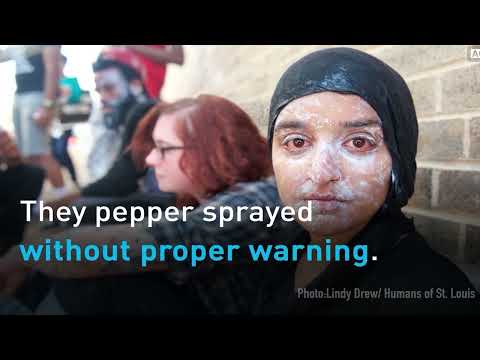 St. Louis: Today, United States District Judge Matthew T. Schelp entered a consent decree in a case brought by the ACLU of Missouri against the City of St. Louis regarding the unconstitutional treatment of protesters by police. The ACLU of Missouri brought a challenge to police tactics used against protestors amid widespread protests of police killings without accountability. Among other things, the decree places stringent limits on the use of chemical munitions at protests, mandates specific warnings before people can be required to disperse or gassed, implements training to discourage the misuse of low-level ordinances to arrest peaceful protesters, requires officers at protests to wear ID at all times or be disciplined, and compels the department to put its protest-related policies online where they are accessible to the public.

During the 2017 protests over a judge’s acquittal of ex-officer Jason Stockley, who killed Black motorist Anthony Lamar Smith, police officers repeatedly engaged in brazenly unconstitutional tactics to silence protesters. Protestors were subjected to arbitrary uses of force and arrests. In a particularly chilling episode, officers chanted “Whose streets? Our streets!” after trapping dozens of law-abiding citizens in a “kettle” downtown before spraying them with chemicals, hitting them with weapons, destroying recording equipment, and arresting them en masse.

Although charges against protesters were ultimately dropped, the only officers held accountable for their misconduct were those indicted under the Trump Department of Justice for unconstitutionally stopping and beating undercover police officer Luther Hall and destroying his property. Officer Randy Hays pled guilty to participating in the assault, and Dustin Boone was convicted by a jury. Another officer pled guilty to lying to the FBI about the crimes. Shortly after the beatings of Hall and protestors, then-Interim Commissioner and now-Assistant Chief Lawrence O’Toole appeared at a press conference to praise his officers’ rampant violations of the Constitution by saying they “owned the night.” Furthermore, then-Mayor Krewson—who had witnessed the injuries Hall suffered at the hands of his colleagues firsthand— continued to express gratitude and applauded the police’s abusive tactics.

The consent decree will limit the tactics police can engage in at protests. “While we are encouraged to see this crucial commitment to change by the City, we know that within the department, there is still strong resistance to holding bad officers accountable and bringing the policing of St. Louis protests in line with what the Constitution requires," said Tony Rothert, Legal Director at the ACLU of Missouri. “This consent decree commits the City to ensuring its police officers honor free speech and assembly rights even when officers might dislike a protestor’s message.”

At a court hearing earlier today, the judge quizzed attorneys on both sides about the particulars of the consent judgment. The parties told the court that the decree:

The court entered the consent decree after ruling that it was negotiated fairly and in the public interest.

Today marks 7 years since a police officer in the St. Louis suburb of Ferguson killed unarmed teenager Michael Brown, Jr. Brown’s death sparked the Ferguson Uprising movement that focused the world’s attention on the violence inflicted on Black and Brown people by police in the United States. Protests in the wake of Brown’s death demanded an end to police brutality and policies that criminalize poverty. Outsiders were shocked by the militarized response to Americans expressing their views, as protestors were regularly subject to force and arbitrary arrest for breaking vague rules that law enforcement made up on the fly.

Finding Courage in the Face of Unconstitutional Police Attacks: Why...

ACLU of Missouri Statement on Acquittal of Jason Stockley

ACLU of Missouri Statement on Independent Investigation of St....