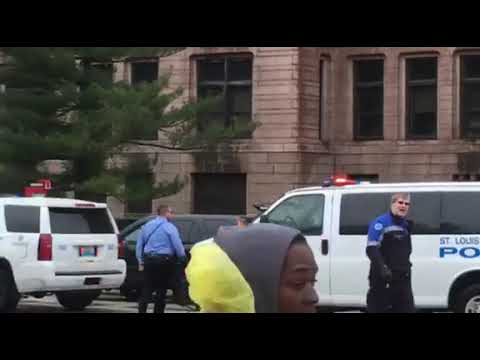 St. Louis—The ACLU of Missouri filed suit against two St. Louis city police officers on behalf of Sharon Morrow after they retaliated against her for recording them making arrests. The officers pulled her from her vehicle, slammed her into the asphalt, and arrested her while she was downtown to distribute food and resources to the unhoused.

In April 2019, Ms. Morrow parked her car on Market Street to deliver food and essential resources to the unhoused population, something she did regularly. While there, she witnessed two police officers arrest a seated man. Standing on the sidewalk, she recorded the arrest with her smartphone but did not interfere with it.

After placing the arrestee in a police vehicle, one of the officers, Steven Ogunjobi, turned his attention to another man standing quietly on the sidewalk watching the arrest. Officer Ogunjobi decided to arrest him as well.

Ms. Morrow—still standing on the sidewalk—recorded that arrest too. Though she did not interfere with the arrest, she pleaded that the arrestee had done nothing wrong. Other officers arrived on scene. During the arrest, the man was tased multiple times.

Officer Ogunjobi shouted to Ms. Morrow and other observers to move back or they would be next. Ms. Morrow complied. In fact, she returned to her vehicle, turned on the ignition, and attempted to leave. However, her car was blocked in by police vehicles and she had trouble seeing around them to pull out of her parking spot. Officer Ogunjobi said, "If you don't leave, I'm going to arrest you." Ms. Morrow responded, "I can’t see, sir!” Throughout this exchange, Ms. Morrow continued to record the officers performing their duties.

Officer Jacob Stein then approached Ms. Morrow's vehicle and shouted at her to get out or he would break her window. As she attempted to shift her vehicle into park, Officer Ogunjobi removed her from her car. Ms. Morrow is a cancer survivor and has mobility issues. Ignoring her pleas that she is disabled, the officers jerked Ms. Morrow around, forcing her arms behind her back, and then performed a leg sweep, which slammed her face into the asphalt.

This unconstitutional, excessive force caused shooting pains in Ms. Morrow's arms, hands, and fingers—something that had previously occurred as a side effect of her cancer treatment but had since dissipated.

“These officers retaliated against Ms. Morrow because she exercised her right to record their misconduct,” said Tony Rothert, legal director of the ACLU of Missouri. “Ogunjobi and Stein knew no force was necessary against he because she was compliant, non-threatening, nonviolent, and committing no crime. St. Louis must stop ignoring its officers’ abuse of powers if there is any hope that the police will gain the trust of the community.”