The American Civil Liberties Union filed an emergency motion on behalf of Ms. Ramey today in the United States District Court for the Western District of Missouri. A Missouri law bars people under the age of 21 from being present at an execution. Mr. Johnson, whose execution is scheduled for Nov. 29

A Missouri law bars people younger than 21 from witnessing an execution. Khorry Ramey is 19.

KANSAS CITY, Mo. — Corionsa “Khorry” Ramey, the 19-year-old daughter of Kevin Johnson, is asking a federal court to allow her to be present for her father’s execution.

The American Civil Liberties Union filed an emergency motion on behalf of Ms. Ramey today in the United States District Court for the Western District of Missouri.

A Missouri law bars people under the age of 21 from being present at an execution. Mr. Johnson, whose execution is scheduled for November 29, has put his adult daughter on this witness list, and Ms. Ramey wants to attend.

The filing argues that the state law violates Ms. Ramey’s right to equal protection under the Fourteenth Amendment and her First Amendment right of association, and that the age threshold is not reasonable and not supported by any safety or penological purpose. The federal Bureau of Prisons and the overwhelming majority of death penalty states either have no age requirement for family of the condemned person to witness an execution, or the minimum age is 18. Ms. Ramey is asking the court to find the Missouri law violates her constitutional rights, and to permit her to attend her father's execution.

Mr. Johnson was 19 when he committed the crime that resulted in a death sentence, the same age as his daughter is now.

“My father has been the only parent for almost all of my life, and he is the most important person in my life,” Ms. Ramey stated in her declaration to the court. “If my father were dying in the hospital, I would sit by his bed holding his hand and praying for him until his death, both as a source of support for him, and as a support for me as a necessary part of my grieving process and for my peace of mind.”

She continued, “The harm that I will suffer because Missouri officials bar me from attending my father’s execution for no other reason than my current age is deep and cannot be fixed.”

Mr. Johnson, who is 37, has been an involved and active parent since his daughter was a small child — despite his incarceration. They built their bond through years of consistent prison visits, phone calls, emails and letters. Mr. Johnson even set up an academic liaison from prison with his daughter’s school so that he could be involved in her educational progress. Ms. Ramey graduated from high school in 2020 and is pursuing a career in nursing. Last month, Ms. Ramey brought her newborn son to meet his grandfather. 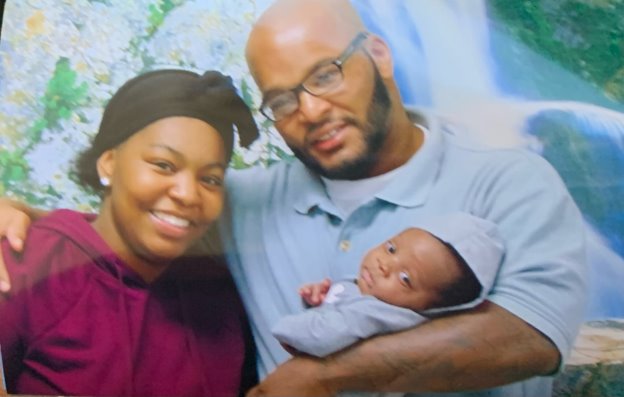 Photograph of Corionsa Ramey and her baby son with her father, Kevin Johnson, Jr.

The following statements can be attributed as noted:

Michelle Smith, Co-Director, Missourians for Alternatives to the Death Penalty:

“Khorry has and is experiencing unimaginable suffering in dealing with the impending loss of her dad, the only parent she has left. Denying her access to attend the execution of her beloved father is but a further piling on of the trauma and unfairness she endures. Logic escapes me in trying to understand how a person can receive the death penalty at 19, a person can receive a life sentence in prison at 19, and a person can even be hired as a prison guard with the Missouri Department of Correction at 19; yet a person cannot witness an execution at 19. The institutional injustices and systemic inequities continue to plague this family and Khorry continues to be most harmed. She, more than anyone, has the right to be a witness when the state executes her father.”

“The Missouri law barring Ms. Ramey from attending her father’s execution is illogical and irrational. If the State of Missouri thinks that her father’s actions when he was 19 make him mature enough to warrant execution, then a 19-year-old should be mature enough to witness that execution.  There is no dignity when a state kills its residents. The State of Missouri can refrain from needlessly inflicting even more profound and grievous pain on Ms. Ramey — a loving daughter with a simple wish to be with and say goodbye to her only living parent when the State takes him away from her.”

“Ms. Ramey has built a strong relationship with her father over many years — despite his incarceration — through personal visits, letters, emails, phone calls, and even introducing her son to his grandfather. Kevin Johnson is Ms. Ramey's only living parent — and as she says, the most important person in her life. It will not hurt the state or harm the state's interest if it permits Ms. Ramey to witness her father's execution. On the other hand, if the state continues to deny Ms. Ramey's request — it will cause her irreparable harm.”

Photograph of Corionsa Ramey and her baby son with her father, Kevin Johnson, Jr.: photo of Khorry Ramey, Kevin Johnson and baby Kaius.jpeg