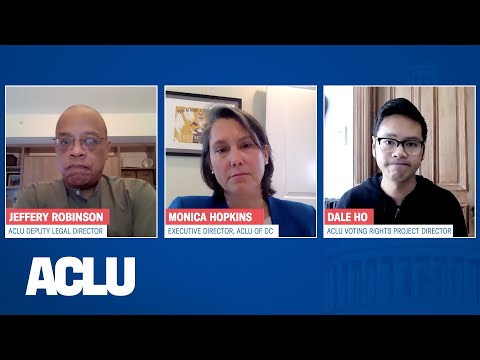 What we saw in the US Capitol last week serves as a call to action for all Missourians. Wednesday’s insurrection was inspired by the President’s false claims about the election and by federal, state, and local government officials that continued to elevate his lies.  We must demand our elected officials end their campaign to undermine trust in our democracy. In our state, this starts now, with Missouri’s 101st legislative session.

Missouri has become a testing ground for propaganda intended to instill fears about voting fraud. The ACLU of Missouri remains deeply concerned about the false narrative on voter fraud perpetuated by Senator Josh Hawley and Representatives Hartzler, Long, Smith, Graves, and Luetkemeyer.  The persistent leveling of unfounded claims regarding the election by elected officials has deteriorated the public’s belief in our democracy, leaving Missourians vulnerable to lies about the credibility of November’s election.

Senator Hawley’s stunts last week were nothing new for him. During his brief time in Missouri, he mongered fear to fuel his ambitions. In his short tenure as Attorney General (while simultaneously running for the Senate), he tried to challenge voting laws on the basis that the hypothetical prospect of voter fraud (even with no evidence) justifies voting restrictions. Although he did not stay in Missouri long enough to see the case through, his arguments were rejected by the court.

At home, many members of the Missouri House of Representatives embraced the President's lies about the election. They lent the claims credibility by holding a sham public hearing where they expressed “no confidence in the reported Presidential election results.” But our Representatives know the truth: President Trump lost the election- an election that was fair, was accurate, and was decisive.

For many years, our state legislature has fomented distrust of voting through campaigns to limit the ways that voters could identify themselves at the polls as well as access to early and mail-in voting options that are ubiquitous in most other states. They choose to suppress voting opportunities that continue the shameful legacy of voter suppression, particularly of Black and Brown communities.

In 2006, the ACLU of Missouri and other groups successfully challenged the first effort to establish voter ID provisions which we knew would disproportionately disenfranchise the elderly and minority communities without ensuring election integrity. In 2011, we stopped the legislature’s effort to trick voters into restricting their own right to vote by placing what the court agreed was a misleading measure on the ballot. Again, in 2014, we halted the legislature’s gambit to disguise voting restrictions and mislead voters into believing early voting will be allowed in all general elections. And in 2017, we sued to require the legislature to keep its broken promise of educating the public about changes to voting requirements before new requirements could be used to deny the right to vote.

The legislative playbook in Missouri is to repeatedly sow distrust to justify efforts to curtail the right to vote. This must stop. Democracy matters. Votes matter and faith in the elections matter- it is the underpinning of our ability to be governed by representational government.

We urge every Missourian to hold their elected officials accountable, to insist that they uphold fact over fiction. We will watch the 101st session closely and hold every elected official in Missouri to the highest standard—one that pushes our rights forward as one people striving to perfect our union.

Follow legislation here and become part of our capitol team.